It all began in 1976 when a small steel fabrication business launched by Wolfgang Schroeter started manufacturing steel railings in Barrie, Ontario, Canada. At that time, no one could imagine the incredible future that lay ahead for Wolf Steel Ltd. and eventually Napoleon® Fireplaces and Napoleon® Gourmet Grills. Since the first wood stove rolled off the production line over 30 years ago, Wolf Steel’s commitment was to be distinctive and successful in everything they do.

The original stove featured a solid cast iron two-door design and was produced in a one thousand square foot manufacturing facility. By 1981, the name “Napoleon®” was born and with it, the first single glass door with Pyroceram high temperature ceramic glass—a first in the industry. This was the first of many milestones for Wolf Steel and over the next few years, the demand for Napoleon’s wood stoves grew beyond Ontario’s borders to the rest of Canada and into the United States. Napoleon® works with its customers designing and implementing features sought after by discriminating consumers around the world. Time after time Napoleon® has led the way with new and innovative patented technology: luxurious Gourmet Gas Grills, exclusive Infra-red grilling experience and some of North America’s most advanced state-of-the-art technology. 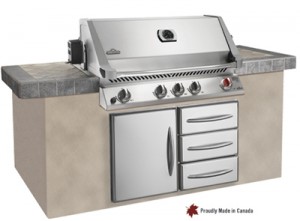 Innovative engineering and design, advanced manufacturing techniques, dedicated customer service, outstanding product quality, and superior warranties distinguish Napoleon® from its competitors. Napoleon® is an ISO9001 – 2000 registered company and operates with 500,000+ square feet of manufacturing space and over 400 employees. We are North America’s largest privately owned manufacturer of quality wood and gas fireplaces (inserts and stoves), gourmet gas and charcoal grills, outdoor living products and waterfalls. Napoleon’s commitment to producing quality products combined with honest, reliable service has proven to be a successful framework to ensuring the continued rapid growth of the company.